With us or not? 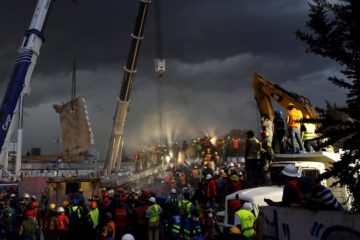 On 1 October we read Exodus 17:1–7, the story of God providing water from the rock. In his homily to the St Margaret’s congregation Michael Paterson focussed on the final phrase, about the complaining Israelites asking “Is the Lord with us or not?”, and gave examples from Biblical times to today of when people have asked this or a similar question. He continued:

The Book of Exodus may be ancient, but the question it raises is very contemporary. And it’s a question that I wish religious people asked more often because, in my experience, it’s much easier to “do religion” than it is to have faith. Let’s face it, you don’t need faith to come to Church when life is going well and all your plans are going along nicely. But, when the going gets tough, and things collapse around you, by God you need faith then. When your relationships break down, and you hurt to the core, that’s when faith kicks in. And when you can’t control what is happening within or around you, that’s when you find out how little or how much faith you have.

And at such times it is the strong, not the weak, the courageous, not the timid, the true believer, not the atheist, who has the guts to ask: “Is God still with me or not?” “Is God still among us or not?”

Michael then spoke movingly of an experience that really came home to him some years ago when he was working in London with people with AIDS:

That experience taught me to look for the presence of God, not in priests and bishops and church meetings, but in the people who run towards human suffering and atrocities – not away from them – in people who do whatever they can to help others rise up again after a fall.

But, above all, that experience taught me that God turns up and shows his face among us every time someone gets up after a sleepless night, a depression, a setback, and, putting one foot in front of the other, faces a new day with courage, when they could so easily have given up and rolled the stone securely over their own premature tomb.

And so for me the question is no longer “Is God still with us or not?” but “Are we still with God?”, or have we who call ourselves believers abandoned faith for its poor substitute, religion? Amen.

Do read the whole of Michael’s sermon, at this link. And think about the issue he raised. The image we’ve used is of a community coming out to help after last month’s earthquake struck Mexico.