The Year of Jubilee … 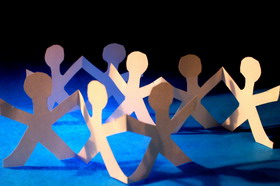 An image of community from Martin Charlesworth’s blog

Our regular cycle of readings won’t reach Luke 4 until next January but, in this period when we celebrate our Lord’s ascension, the coming of the Holy Spirit, and the Queen’s Diamond Jubilee, perhaps we should recall what Jesus read aloud in the synagogue at Nazareth at the start of his ministry.

A key phrase from the passage he chose (Isaiah 61) is the year of the Lord’s favour, which his hearers would almost certainly have associated with the Year of Jubilee described in Leviticus 25.

“Every fifty years, the Jewish people had to take major steps to sort out all of the injustices and inequalities that had arisen over the years due to both human foolishness and undeserved misfortune … The Year of Jubilee provided hope for those who were materially impoverished, and it prevented the wealthy gaining too much power. It was also a sign of God’s grace to his people and provided blessings for those who had joined the Jewish people or who were living in Israel as foreigners.”

Change the context to today’s Britain, and there are similar needs and challenges. Yet Jesus came to create a living community that would bring about change in the lives of its members which would naturally spill over into the society within which they were set, demonstrating compassion in practical terms as they had opportunity. How do we measure up?

[Adapted from a blog that used to be on the Martin Charlesworth site. More about the current (2019) Jubilee+ initiative at this link]

Look out for changes during December – check at What’s on!

mostly on 1st Sundays, but not every month, and occasionally on a Saturday – see What’s on for details