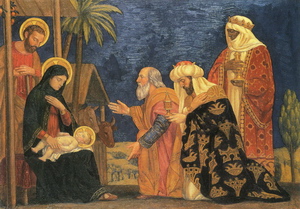 The story of wise men from the East, who follow a star in search of a king, have to stop off in Jerusalem to ask the way, get involved in dealings with Herod (a most unsavoury monarch!), and end up worshipping a child who must have been far removed from what they had expected, has inspired many an artist. As indeed many a Christmas card!

Yet, of the Gospel writers, only Matthew gives an account of this event. It certainly follows his theme of the Kingship of one who has come to fulfil the promises of God: look at the way that the gifts offered to Jesus mirror Isaiah 60:1–6, our Old Testament reading for Epiphany.

So, is the story true? As with witnesses in court, one has to be careful when there is only one source, so it cannot be possible to prove that the event happened in the way Matthew recorded. However, as John Martens puts it: “Whether every aspect of the account of the Magi coming to worship Jesus is historically accurate is not that significant to me spiritually, for the story points to deeper truths: God’s son is the true King, though vulnerable and weak, not the earthly Kings who seek their own aggrandizement and power; and people from the entire world will come to worship this King and they are represented in Matthew by the Magi.” Whether the Magi actually came to Jesus as described, or not, Martens was happy that the story of their coming to Jesus had been told. “Epiphany is the celebration of the manifestation of the divine in the infant Jesus and the recognition of that reality the world over. I believe that is true.”