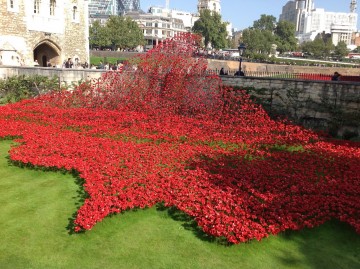 A sea of red is filling the dry moat at the Tower of London as thousands of ceramic poppies sweep around its perimeter. The first of 888, 246 poppies – each representing a British or Commonwealth soldier killed during the First World War – was planted on 17 July and the final one will be added on Armistice Day, 11 November. This installation, called “Blood Swept Lands and Sea of Red” was unveiled on 5 August, one hundred years after the first full day of Britain’s involvement in the First World War.

Yes, it’s a fund-raiser – net proceeds will go to military charities – but it’s much more: Paul Cummins and Tom Piper have created a powerful visual commemoration of  what was both a world-changing event and a vast collection of personal and local tragedies.  No wonder that Sandra Young, who took this photo on 8 September, reported that walking round the perimeter of the Tower and witnessing all the poppies was a very humbling experience.

At our service on Sunday 9 November, we’ll be remembering  particularly all who died in the 1914–1918 war, but also all who have lost their lives in the other wars our nation has fought. And, recognising the love of God for all humanity and the suffering of Christ with and for all, we will remember all who are dying in the conflicts that blight our world today. In this special anniversary year, there will also be a tribute to the fallen in music and readings in our church at 6.00pm on Sunday 23 November, as part of our “Sunday@Six” series.

And we will be praying:

Look out for changes during December – check at What’s on!

mostly on 1st Sundays, but not every month, and occasionally on a Saturday – see What’s on for details