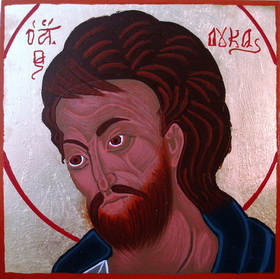 An icon of Saint Luke

Since the beginning of June we have been reading from Luke’s Gospel, the first of the two books that he wrote. However, despite the wealth of historical detail in Acts, we learn little there about the man himself whose festival we shall be recognising this month.

The evidence of his work is that Luke was a Greek-speaking and well-educated man, and we believe he was a Gentile (by tradition from Antioch in Syria), the Apostle Paul’s companion on many of his missionary journeys, and the doctor whom Paul called “Luke, the beloved physician” in Colossians 4:14 and was glad to have with him during his imprisonment (2 Timothy 4:9–11).

Luke’s account of the good news is the only one that records the annunciation, the songs of Mary and Simeon and the story of the birth of John the Baptist, and gives much detail about the early life of the Jesus who entered history as a human being. [Had Luke met Mary? Orthodox tradition is that he produced the first icon of her.]

His gospel has messages for us today in that it shows special sensitivity to outsiders (the Good Samaritan; the widow of Zarephath; Naaman the Syrian) and to women, showing several women among the most dedicated of Christ’s followers. He speaks much about prayer, showing its practice to be rooted in the example of Jesus, and there are many parables relating about the proper use of money.

Keep up with Luke’s message by joining us for worship!