Ask the Lord of the harvest … 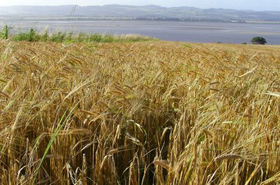 A field of ripening barley in North-East Fife

This picture from Peter Mannox’s 2008 blog shows a late-August crop still several weeks from harvest, which was predicted to be a month later than normal. It’s a reminder that the good things we take for granted are affected by climate and weather, and too much water (or worse, too little) are for many of the world’s people matters of life and death and not just a minor inconvenience.

As well as giving thanks for God’s goodness to us, who have the fortune to live in a green and fertile land, use this time of harvest to pray for (and give to) those who are less fortunate, especially in lands hit by famine and the effects of strife.

And think too of the other sort of harvest, the one that Jesus was talking about in Matthew 9 when he said to his disciples, “The harvest is plentiful but the workers are few. Ask the Lord of the harvest, therefore, to send out workers into his harvest field.”

Give thanks and pray for harvests of both kinds as you join us in worship.