An influence that lives on … 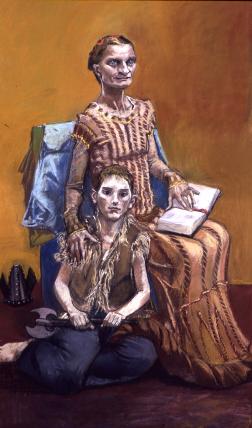 Three churches in the Dunfermline area are dedicated to St Margaret of Scotland, including our Episcopal church at Rosyth, and her life will again be celebrated on 16 November.

This painting shows Margaret near the end of her life, perhaps having heard that her husband Malcolm and one of her sons had died at the Battle of Alnwick. She is gazing into the far distance, as if her sights were already set on the next world, like Jesus, setting his face steadfastly towards Jerusalem and his imminent passion and death. Her face is lined with the marks of suffering; her hand rests upon her cherished bejewelled gospel, now in the Bodleian Library.

At her feet sits her son, who will become King David I, perhaps caught between the lure of the weapons lying like a child’s toys around him, and the summons of his mother’s book to fight different, spiritual, battles. Son and dying mother: a kind of pietà in reverse. In a way, the themes are the same: a kingship not of this world; a vocation where royalty means walking a via dolorosa; the path of servanthood of the one who first suffered pain before he entered into glory.

It is not a comfortable painting, but then Margaret was not one to reign in easy state while others suffered. (Adapted from this original)

In this month of remembrance, give a thought to all who have selflessly worked, and continue to work, for others, as you join us in our worship.