A great cloud of witnesses … 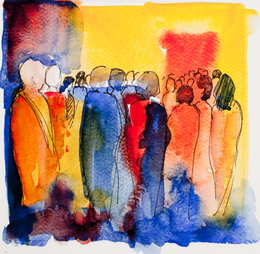 In this month of remembrance we inevitably think of those who have had an influence on our lives, our own “cloud of witnesses”, and this phrase prompts us to think about Hebrews 11:1–12:3, a much-loved passage that has been described as “Faith in Action”.

What at first appears to be a random list of those with faith (which v.1 describes as “confidence in what we hope for and assurance about what we do not see”), actually divides into four:

But the preacher suddenly pauses, and shocks us with the quiet assertion that, though all of these heroes of the faith were commended for their faith, “none of them received what had been promised” (v.39). But he adds the key reason: “since God had planned something better for us so that only together with us would they be made perfect” (v.40).

The great cloud of witnesses are not just interested bystanders. The Preacher has slightly altered the metaphor here. Instead of an unbroken chain we now see a sports arena full of athletes – and not just on the field but in the stands as well. They have run their race and now it’s our turn. They are there to cheer on the next generation.

“Therefore, since we are surrounded by such a great cloud of witnesses, let us throw off everything that hinders and the sin that so easily entangles, and let us run with perseverance the race marked out for us.” (v12:1)

Extracted from Kevin Dare’s sermon at this link.